COUNTDOWN research conducted in Ogun State, Nigeria indicates that understanding in relation to Neglected Tropical Diseases (NTDs) and associated awareness campaigns is limited in some areas. Consequently, the NTDs programme unit in the state recently organized an NTD awareness creation campaign across the 20 Local Government Areas (LGAs) of the State. The goal of such campaigns is to increase participation in the distribution of medicines to control diseases like onchocerciasis, schistosomiasis, and lymphatic filariasis and help people manage side effects if they encounter any after taking the medicine. Ogun State is one of two states in Nigeria where COUNTDOWN has been working to understand how the NTD programme is functioning and how to accelerate progress against NTDs.

In the state capital – Abeokuta, staff of the NTD Control Unit and other public servants from the Ministry of Health and the Ministry of Information walked through the streets, calling out messages, distributing handbills, and holding illustrative posters that explained the drugs used in the mass administration of medicines (MAM). 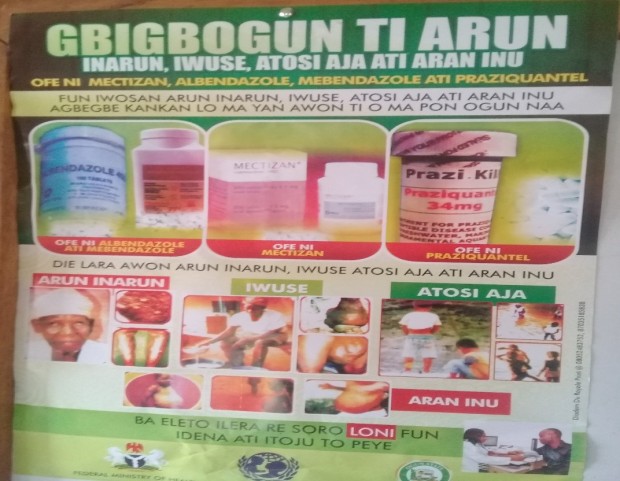 A poster in the local Yoruba language displaying the four NTDs prevalent in the state and their treatment  Photo credit: James Yashiyi (Social scientist, COUNTDOWN Nigeria)

As part of the awareness creation, the NTDs Control Unit staff were joined by parasitology experts from the University on a FUNAAB Radio show (89.5FM) based at the Federal University of Agriculture, Abeokuta in Ogun State. They shared with the public the signs and symptoms of several NTDs and explained how to prevent them. They also debunked the myth that preventive chemotherapy (PC) drugs can be harmful and encouraged parents to set a good example of hygiene for their children like regular washing of hands and keeping their environments clean.

This campaign featured evidence-based approaches informed by COUNTDOWN’s situational analysis and ongoing research. Here are a few ways that this campaign reflects the findings of COUNTDOWN research.

The project’s situational analysis brought attention to the perspectives and needs of communities. In the development of the awareness campaign, COUNTDOWN’s Participatory Action Research(link is external) approach brought all health system actors together whilst focusing on the community perspective. To learn about the programme COUNTDOWN used qualitative methods such as interviews, participatory workshops, and focus groups. The volunteer community directed distributors (CDDs) and school teachers, who carry out the essential task of giving people PC drugs, were engaged in mock trainings using existing information, education, and communication materials. Feedback sessions from teachers, children, community members and CDDs revealed opportunities to improve these materials, which were updated to use the local language and have clearer, more appealing visual aids. COUNTDOWN held regional and national dissemination meetings, which informed the decision of the Ogun State NTD programme to make raising public awareness a priority.

2. Use of Strategic Points in Awareness Creation

One of the activities completed during COUNTDOWN’s participatory action research cycle were several transect walks in various study communities, including those in urban and rural areas. This involved community leaders walking through their communities with researchers and pointing out strategic places where people gather, such as to do business, socialize, or worship. Discussions with female and male community members also revealed important locations and communication channels where men and women can get information. To maximize the impact of the campaign, the NTD programme used research findings to select popular communication channels, like the radio, and strategic locations to distribute PC drugs, such as the large Kuto Market in the state capital, Abeokuta.

3. Adapting to changes over time

A key theme highlighted in the situational analysis is that new challenges have emerged over time. MAM’s success has reduced morbidity due to NTDs, leading some to think that taking PC drugs is not necessary. Volunteers and school teachers reported having to address rumours that PC is harmful. The radio show addressed these issues head on: it explained the need to take the medicine over several years and as a preventive measure and advised against believing “fake news” about the medicines killing children or the government having ulterior motives. Engaging influential community members and leaders such as members of the Parents Teachers Association (PTA), religious leaders etc. was critical to supporting the programme to address rumours about the need for the medicines and their side effects. COUNTDOWN’s community mapping activities supported the programme to identify which individuals could be targeted to support programme delivery in this way.

The global health community is always looking for ways in which the move from evidence to practice can be accelerated and made smoother. It is exciting to see how COUNTDOWN’s holistic approach to research uptake is helping the NTD programme in Ogun, Nigeria. We can see how participatory methods in research allow for the voices of communities to be heard by programme leads, facilitating better community ownership which in turn leads to greater acceptance of medicines.